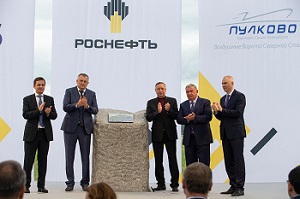 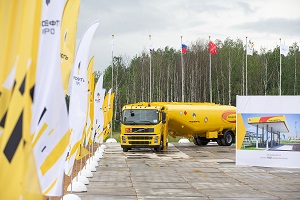 The opening ceremony was attended by Aleksandr Beglov, Acting Governor of Saint Petersburg, Denis Bortnikov, Deputy President and Chairman of the Management Board of VTB Bank, Aleksandr Drozdenko, the Governor of the Leningrad Region, and Leonid Sergeev, CEO of Northern Capital Gateway, (Operator of Pulkovo airport).

«TZK Pulkovo», whose major shareholder is «Rosneft Aero», will be one of the most modern refueling complexes in the country, it would satisfy air hub's growing demand for high-quality fuel, and will create new job opportunities. The design capacity of «TZK Pulkovo» is 300,000 tons of jet fuel, which accounts to about 50% of the annual consumption, taking into account development plans of Pulkovo Airport.
Development of jet refueling business is one of the key business streams of Rosneft Currently «Rosneft Aero» owns network of refueling facilities at 21 sites located in the key regions in Russia and overseas and offers “into-plane” refueling at 42 Russian and international airports. In 2018, «Roseft Aero» refueled more than 200,000 aircrafts, its market share in jet fuel production amounted 32.6% «TZK Pulkovo» construction project includes:

The infrastructure development and new refueling complex with centralized refueling system will enhance attractiveness of Pulkovo Airport as a transit hub for long-haul carriers also by means of speeding - up of service in the airport.

TZK Pulkovo construction project is a part of the Company's strategy to expand its aircraft refueling network and increase jet fuel supplies to its consumers. As one of the leading suppliers in the Russian jet fuel market, «Rosneft Aero» has unique experience in the construction and management of airport fueling facilities. The Company has successfully completed several significant projects in the key regions of Russia, including the largest one in the last 30 years, the construction of a refueling complex in Vladivostok Airport “Knevichi” 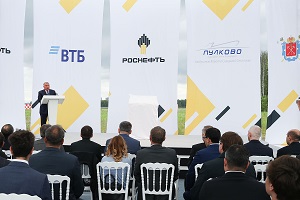 Rosneft pays special attention to the development of the airport fuel infrastructure facilities in Moscow and Saint Petersburg as well as in other regions of the country. The Company's presence in major regional airports such as Sakhalin, Irkutsk, Vladivostok, Krasnodar, Sochi, and Anapa, contributes to the efficiency of air hubs and makes a significant contribution to economic development of the regions.

“The construction of «TZK Pulkovo» is the continuation of the Company's project work aimed at the development of the regional transport infrastructure, said Mr. Sechin, the Chief Executive Officer of «Rosneft Oil Company», at the ceremony. - Investments in this project will amount to more than 3 billion rubles. The new refueling complex with a capacity of 300,000 tons of jet fuel per year will fully meet the high international standards and will significantly increase the attractiveness of Pulkovo as a transit hub for long-haul carriers.'

The successful implementation of the project will contribute to the achievement of strategic goals in the development of aircraft fuel supply business in Saint Petersburg's air hub. 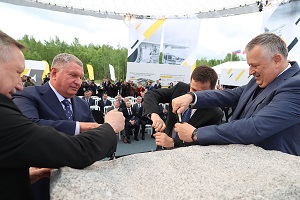 'The government of Saint Petersburg assigned a “strategic” status to this project ,' mentioned Rosneft Chief Executive Officer. - Its implementation will provide the city with several advantages, such as creation of new job opportunities, attraction of investments, and additional tax revenue to the budget.' 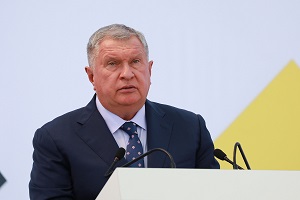 In total, there are 59 Rosneft petrol stations, providing steady supply of high-quality oil products to consumers in the region, as well as services for ships towage and bunkering and supply of lubricants produced by Rosneft.

'Today, by laying the first stone in the foundation of the refueling complex, we set for ourselves the goal for creating an advanced fuel infrastructure that will meet the needs of the air hub in the future, taking into account the growth of the passenger traffic', Mr. Sechin stated.

Pulkovo Airport is one of the largest airports in Russia and has a significant development potential. In 2018, Pulkovo served a record-breaking number of passengers, 18.1 mln, becoming the second largest air hub in Russia after Moscow. 75 airlines, including 26 Russian and 49 international ones, operate flights from Pulkovo.

One of the drivers for the development of Pulkovo Airport is the growing passenger traffic from Europe and China. The construction of new refueling complex will allow the airport to become the key air hub in the North-Western Russia, contributing to the development and prosperity of the region.

«Rosneft Aero» is a leading jet fuel supplier and a subsidiary of Rosneft Oil Company. Today «Rosneft Aero» provides into-plane fueling services at 42 airports in Russia and overseas including Moscow, Saint-Petersburg Sochi, Krasnodar, Irkutsk, Vladivostok, Anapa, Yuzhno-Sakhalinsk, Berlin and Munich in Germany, Tbilisi, Batumi and Kutaisi in Georgia, Ulan-Bator in Mongolia and many others. At the end of 2018, «Rosneft Aero» sales volume at the Pulkovo airport increased by more than 47% compared to 2017, which summed up to 11% of the airport's total demand.