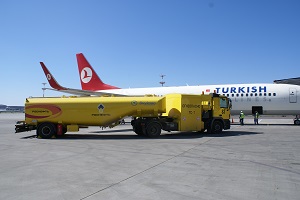 According to the terms of the contract, the into-plane refueling will take place in Vnukovo airport (Moscow), Koltsovo airport (Yekaterinburg), Kurumoch airport (Samara) and Platov airport (Rostov-on-Don). The total shipment volume to Turkish airlines amounts to 34.5 thousand tons of jet fuel.

When making a choice in favor of Rosneft Aero, airlines consider such factors as a high level of services provided, on-time fuel supply, and airport network coverage. Due to the vast geography of its own refineries, Rosneft covers almost all regions of Russia; providing direct supply of jet fuel to a number of foreign air carriers and the most of Russian airlines.

Rosneft Aero and Turkish Airlines started their cooperation in 2012 and continue its successful development in the present. In the future, the parties intend to expand the geography of operations on mutually beneficial terms.

Turkish Airlines is the largest airline in Turkey. It operates regular flights to more than 290 airports worldwide. In 2018, the company carried more than 70 million passengers. The company is a member of the world's leading aviation group – Star Alliance.