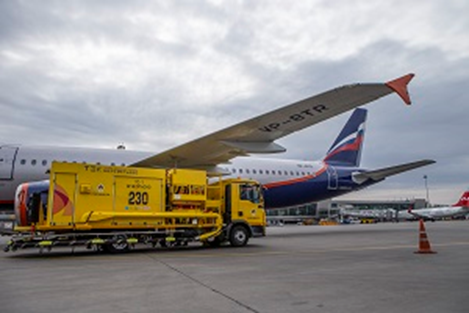 Rosneft Aero, a Rosneft subsidiary responsible for the sales of jet fuel and aircraft refuelling reached its 20 million sales tons mark by refuelling the airplane on the route from Moscow to London at Sheremetyevo airport in Moscow.

Since the launch of its operations in 2008, Rosneft Aero has gained a global momentum and expanded its operations to 42 airports in 4 countries providing the best services and high quality jet fuel to major airlines. Currently the company has more than 100 clients and owns 18 modern fuelling facilities from Moscow to Berlin. The largest of them – Fuelling Complex at  Sheremetyevo airport delivers over 1 million tons of jet fuel to airline companies annually. This is more than half of the total volume of entire Sheremetyevo Airport consumption. For instance, this volume allows the airport to carry out over 400 take-offs per day or about 150 thousand take-offs per year.

The company's unique centralized airplane refuelling system at Sheremetyevo is the largest facility in Russia with a total pipelines length of 44 kilometres. The key element of Rosneft Aero operations in Sheremetyevo is a quality control laboratory, which is one of the most advanced in the industry. The laboratory conducts about 4,500 jet fuel analyses annually. Each analysis is based on 23 quality indicators tests.

Rosneft Aero is a leading aviation fuel supplier and a subsidiary of Rosneft Oil Company. Today Rosneft Aero provides into-plane fueling services at 42 airports in Russia and overseas including Moscow, Saint-Petersburg, Sochi, Krasnodar, Irkutsk, Vladivostok, Anapa, Yuzhno-Sakhalinsk, Berlin and Munich in Germany, Tbilisi, Batumi and Kutaisi in Georgia, Ulan-Bator in Mongolia and many others.